With War Dancer progeny on the track it’s sure to be an exciting season !

July 17, 2021. War Smoke, bumped between foes at the start, was urged three wide, nearly at the back of the pack, going seven wide in the stretch, leaving his foes behind, and persevering to take 2nd.

DANZIGWITHTHESTARS WINS ON OPENING DAY AT THE SPA

July 15, 2021. Danzigwiththestars tracked the pace along the inside, sitting patiently until urged to take the inside route in the upper stretch, tried to tip out, but couldn’t find room, saw daylight along the rail and safely slipped through the seam to collar the leader in the final jumps to score the win.

July 6, 2021. War of Thrones gained into the turn, angling out in the lane and finishing well for the place.

July 2nd, 2021. Surprise Boss showed good speed and went clear early and was challenged on the turn, then dueled with the winner in the upper stretch, battling gamely, and just missing the win to take the place.

June 27, 2021.  Gator Bite broke well, racing off the pace before moving up on the inside, rallied to go three wide into the stretch, where he drew clear for the win.

U SHOULD B DANCING TAKES 2ND AT BELMONT

June 25, 2021. U Should B Dancing, bumped at the start, was asked at the quarter pole, bumped again with a foe, but persevered to win the place.

June 19, 2021. Funwhileitlasted was brushed at the start, but ultimately swung out, and under coaxing was there for the place.

June 19, 2021. Step Dancer broke in and bumped with a foe at the start, before settling on the outside.  He was put to a drive in the stretch and moved out to finish with energy, garnering the place.

June 17, 2021. Running green from the gate, Surprise Boss showed late interest in the stretch, to close for 3rd.

June 16, 2021. After a duel into the lane, You’ve Got Male responded to urging and drew off,  besting his opponent and taking the win.

June 2, 2021. War of Thrones broke clean, and was well placed along the rail on the turn. He persevered to finish a close 2nd well ahead of the field.

DANCIN IN DUBAI TAKES THE WIN AT FINGER LAKES

May 31, 2021. Dancin In Dubai broke sharply, set the pace, responded when clear and was ridden out for the win

ZEALIN IT SECOND AT PARX

May 25, 2021. Zealin It set the pace inside and led into the stretch, but was overcome, finishing 2nd.

MILITARY COMMANDER FIRST ON THE DIRT AT PIMLICO

May 20, 2021. Military Commander broke well, assuming an early lead and setting the pace. He opened up in the stretch and left the field behind to win by 6 lengths.

ZEALIN IT FINISHES FIRST AT PIMLICO

May 13, 2021. Step Dancer went wide in the stretch, made a good effort, and finished third on the turf at Belmont.

May 1, 2021. Bumped at the start, Funwhileitlasted took the inside approaching the lane, and rallied to finish third.

May 1st, 2021. Barrage dueled with an opponent, overtaking by the eighth pole, and going on to take second.

WAR TERMINATOR 2ND ON THE TURF AT BELMONT

May 1st, 2021. War Terminator was asked when 4 and 5 wide on the turn, rallied in the stretch and closed to take the place.

April 26th, 2021. War of Thrones, responding when roused, took the lead and won going away in his first race at Finger Lakes, for trainer, Chris Englehart.

SHE’SADIRTYDANCER 2ND ON DIRT IN STAKE

April 18th, 2021. Shesadirtydancer broke well and went to the front early, ending up in a dual with her opponent in the stretch, being just edged out for the win to finish second, well ahead of the pack.

April 17th, 2021. Brushing the gate at the start, Sinful Dancer then jostled with an opponent and was five wide when asked the question, dropping to three wide to pursue the lead and finishing a respectable 2nd on the dirt.

April 17, 2021. Sassy Melissa, five wide on the Aqueduct turf, was roused, taking the lead at the quarter pole, to hold off the fast closing runner-up for the win.

April 17, 2021. Dancing Buck settled three, then four wide, kicking clear in the final furlong and holding strong for the win on the turf at Aqueduct.

WAR TERMINATOR WINS ON THE TURF AT THE BIG A

April 15th, 2021. Despite being bumped at the start, War Terminator dug in to prevail in the stretch and won going away by 2 3/4 lengths.

March 31st, 2021. Charge Into War advanced 4 wide on the turn, got fanned 6 wide in the stretch, but continued with interest to follow the leaders, to take the show.

March 14th, 2021. Gator Bite, running along the rail, found an opening in the stretch and followed on the heels of the top pair, to finish third.

SINFUL DANCER A CLOSE 2ND ON THE DIRT AT AQUEDUCT

March 7th, 2021. Despite brushing the stall at the start, Sinful Dancer went on to come from 6th place, four, then three wide, chasing the winner to the finish, well ahead of the rest of the field.

January 30th, 2021. Sassy Melissa chased the winner to finish 3rd on the dirt at Aqueduct

POP THE BUBBLY 3RD IN MSW

January 10th, 2021. Pop The Bubbly finished a respectable 3rd on the dirt in a MSW at Aqueduct

January 9th, 2021. SHESADIRTYDANCER, with Kendrick Carmouche up, held off the competition in an exciting wire-to-wire run Saturday at Aqueduct, to take the win by 2 1/2 lengths.

December 31, 2020. DANCING BUCK sparred for command two to three wide, took charge as the second fraction was being finalized, coming up to the three-sixteenths pole, dug in well to fend off the stretch threat, and kept busy till the end. 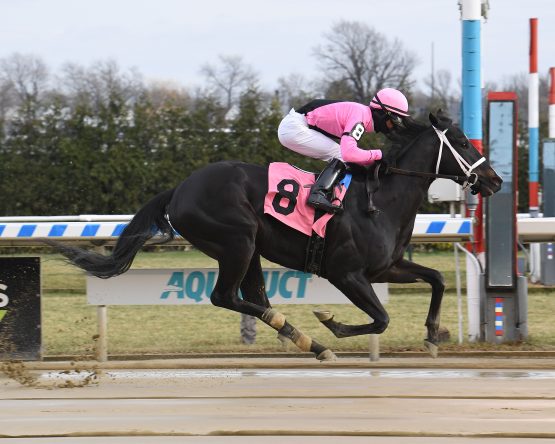 ATHENA DANCER FIGHTS FOR THE WIN AT AQUEDUCT

November 20, 2020.  ATHENA DANCER ran a tenacious race today at Aqueduct, and prevailed in the last strides to finish ahead by 3/4. 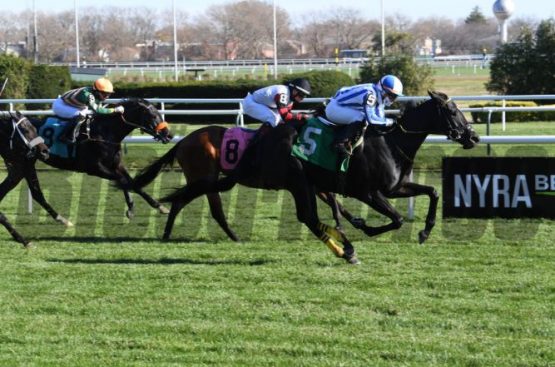 November 19th, 2020. WAR DANCER filly, FUNWHILEITLASTED, under a drive for home, reached the wire      3 1/4 lengths ahead of the rest of the field today at Gulfstream Park West.

November 8th, 2020. WAR DANCER filly, MS WICKED came from far back and ran a determined race to cross the wire first in her race at Woodbine today. She had previously finished a game 3rd in the Muskoka Stakes on August 30th. 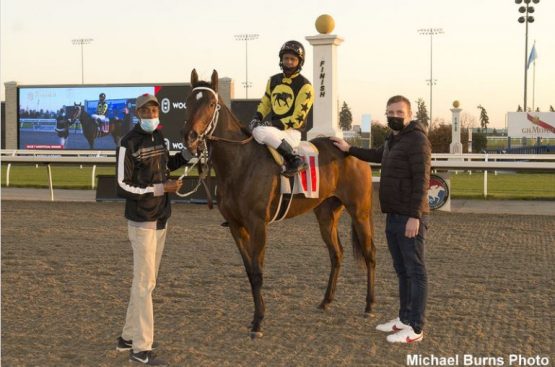 October 31st,2020. Just weeks after finishing a gritty third in the G2 Pilgrim Stakes at Belmont, STEP DANCER, running in open company, stepped up to win by 3/4 of a length in the AWAD Stakes, becoming the first stakes winner for his sire, WAR DANCER.

SHOW ME THE HONEY WINS FIRST TIME OUT

October 3, 2020. After getting bumped near the 3/16th pole, War Dancer filly, SHOW ME THE HONEY rallied and in a duel for first, with a sixteenth remaining, shook free to take the race. 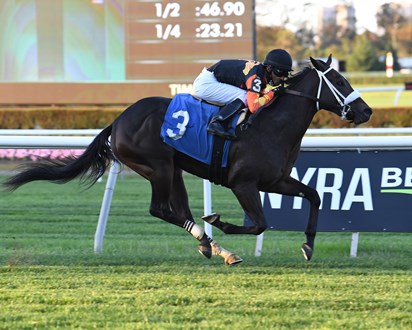 September 4, 2020. At the end of a socially distant summer, first-time starters, STEP DANCER and  PIVOTAL RUN created a stir on closing day at the Spa, with a one-two punch, as they crossed the wire first and second. 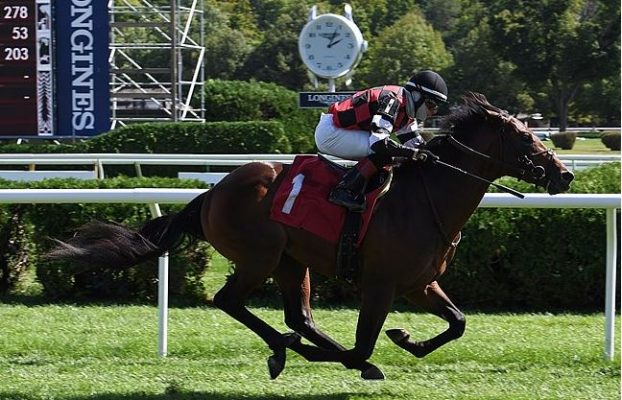 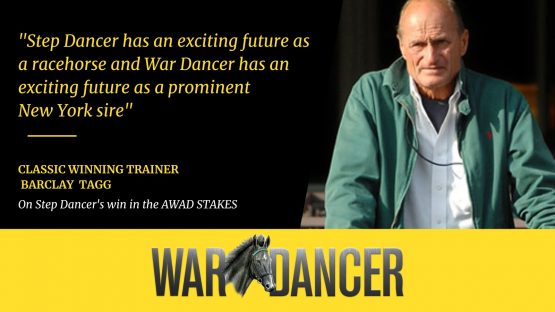